Tourtravelinfo.com
Its all about destinations 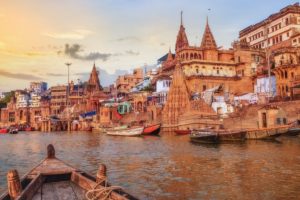 Varanasi is the holiest city for Hindus. Travel to Varanasi – to a desired destination and also the city where many will die. But let’s say it openly: Varanasi can be hellish. Especially the city center. But visiting it once in a lifetime is an obligation for the traveler.

Before dawn, a tide of pilgrims and visitors head towards the Ganges – the sacred river -, many of them to fulfill the rite of purification by immersion in the river. Males do it in briefs or calzones, the most of the women dressed in the sari. Relating purification with immersing yourself in the rotten waters of this river is left for scholars, but in view of man from other latitudes, it seems a complete nonsense. But the show, watched at dawn in the Ghats near the temple of Kashi Vishwanath, when the sun embellishes even more the pilgrim saris and gilds the walls of the temples, it is indescribably exciting, literally unforgettable. Watching live leaves you perplexed.

To get there, you make your way through a crowd of all ages – men with much worn saffron-colored clothes – there is a great variety of sounds, and as you approach the Ganges human condensation becomes more and more dense until the point of opening step to push not to lose the guide. Then we take a walk through the very narrow streets in search of some temple and cremation sites – which look like woods. The entire area is filth. Cow shit (“cow poop”, they tell us continuously when they discover our nationality), rats, dogs and naturally cows – sometimes you have to get on where you can so they can pass. The smell of wood or burned bodies contributes to a remarkable stench. When leaving this labyrinth of streets Lalit exclaims: “we left hell.”

At dusk, religious rites are celebrated next to the aforementioned temple of Kashi Vishwanath in honor of the god / river. Very colorful, enormously aesthetic, officiated by young people with Western features. With live music and sounds produced by the variety of bells handled by the officiants, perfectly coordinated. We see it from a terrace where Lalit has taken us, and for whose use we have to pay a bad face for having driven us there. “It’s a robbery,” says Lalit, completely indignant that someone takes advantage of religious matters. To reach the terrace, we have climbed some stairs completely dark and crossed a room partially in the ceiling where an old man – who seems very ill – joins slightly when he hears us.

We left there in search of our rickshaw drivers, taxi cabs, who are with many others in a completely dark, sinister ruined lot, and that would give us the feeling that they took us there to assault us. They take us out with great fatigue, by force of pedals in the area, between an impossible traffic, an infernal noise of beeps, speakers of the temples, the shouts of the rickshaws drivers, the voices of the people … Upon reaching the Minibus and then to the hotel, the silence is strange. A luxury within reach of few in the mythical city.

Top Most Beautiful Beaches in India – You Must Visit…

Top Best Outdoor Adventure Activities to do in India

This website uses cookies to improve your experience. We'll assume you're ok with this, but you can opt-out if you wish. AcceptRead More